“Take Care Of Your Memories”

How one ladies late husband could be kept close to her heart...

Maureen Cooper’s husband had recently passed.
After a very emotional event soon after his passing she had a beautiful idea in mind…

Maureen was holding her husbands wedding ring, trying to envision the perfect way to remember him. After much thought it struck her to have the ring remodelled into a necklace that she could wear every day, constantly reminding her of her husband and keeping him close to her heart forever.

Could this be done?

Maureen found me while searching the internet for someone with the expertise in delivering such an important commission.

We spoke on the phone and agreed for a time for Maureen to come down to the studio and discuss in great detail exactly what was wanted and how achievable it was. You see, sometimes the materials can’t have the desired quality or thickness to remodel without a lot of wastage and some jewellers will take the original pieces and not actually incorporate them into a remodel at all!

Maureen brought a rough sketch in her hand. Her idea was to turn her husbands ring into two stars and a leaf to be worn as a necklace.

I explained that for metallurgical technical reasons, which I went into in detail, I do not melt down gold alloys and as the ring was of significant sentimentality it should be used, if possible, by way of drawing into a wire form and or rolling into sheet.

I ascertained her late husband’s gold ring was robust enough, both in width and thickness to be used in some way and it was now down to me to design a pendant that closely resembled Maureen’s brief. I calculated, that it would be possible to make a larger open star from a rectangular wire drawn down from half the ring, and a smaller solid star from the other half by rolling the metal slightly thinner, cutting into 3 equal lengths, then soldering one on top of the other to create a thicker plate from which I would cut a solid star.

This could then be carved to a slightly bulbous shape. My suggestion then was to supply a piece of palladium sheet, cut and textured to resemble a feather. Palladium being ideal for the purpose being very white in colour and giving a fine sharp finish when textured.

Being able to create the 2 stars from the gold wedding ring as described, I was able to use all the gold with only a little wastage (approximately 5% with the offcuts from the cutting out of the solid star). Creating in any other way, such as melting down would require the addition of more gold diluting any sentimentality or even lose it completely. 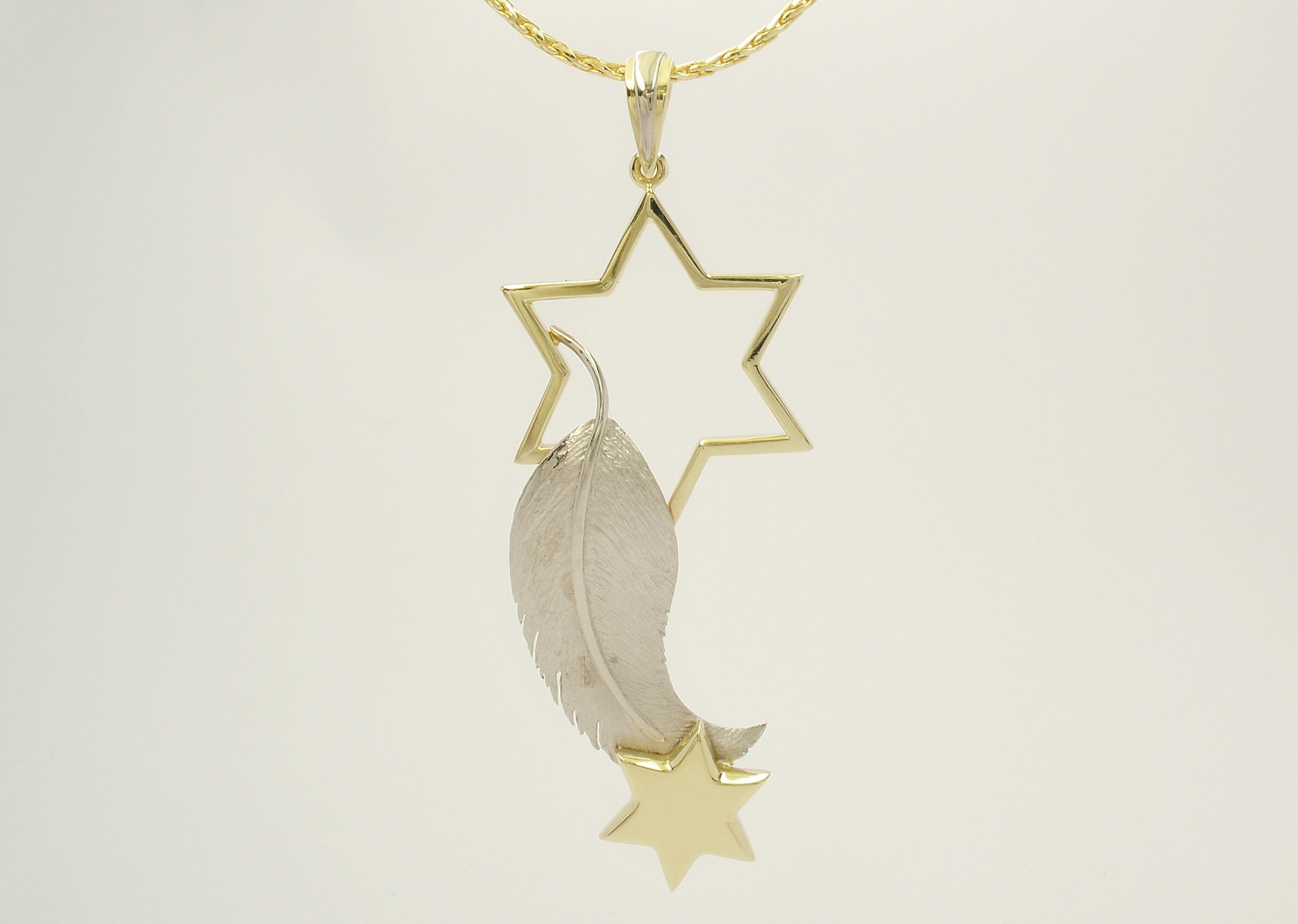 “After the loss of my husband I decided I would like to have his wedding ring re modelled into a piece of jewellery that I could wear and have him close to me.

“I found Alan Fulton while researching on the internet and after initially speaking to him on the phone, arranged an appointment to discuss my thoughts on what I was hoping to have made.

“I had taken a rather rough sketch of a pendant with me. Alan then asked what my idea meant to me so that he could understand fully and aid him in creating the correct picture in his mind. He took a long time explaining what could be made from my late husband’s ring and how close he could get the design to my original idea.

“His approach was very compassionate and at no time did he make me feel uncomfortable at such a sensitive time in my life.

“The end result was a beautiful pendant which has been so much admired and has started conversations with complete strangers.

“I am absolutely delighted with the service, attention to detail and sensitivity at such a difficult time I received from Alan and have no hesitation in recommending him to anyone. I was so pleased that I have since asked him to make me earrings to match.”

If you would like something remodelled or commissioned from scratch to remember a loved one, please contact me. I have customers worldwide, from our home in Glasgow… to London, California, Australia, Switzerland, Botswana, Canada, Singapore and Holland to name a few.