Claiming on your Insurance

If you have lost a diamond, diamonds or other precious stones from an item of jewellery or have lost or had stolen an item/s and look to claim on your insurance my advice is to contact me first before contacting your insurance company.

Having some considerable experience in dealing with insurance claims on behalf of clients over the years, claiming can prove to be a bit of a mine field and can become problematical if approached in the wrong manner.

By contacting me at the outset I can guide you through the process which will simplify what could otherwise become an onerous and protracted procedure.

BELOW ARE SOME EXAMPLES OF INSURANCE WORK 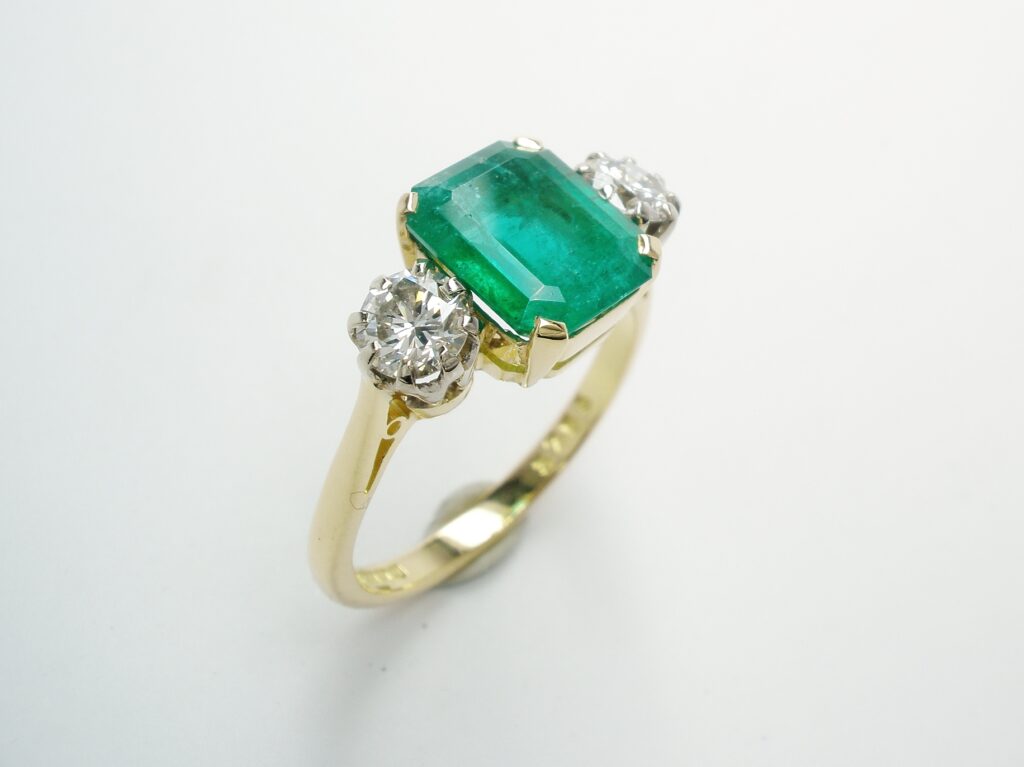 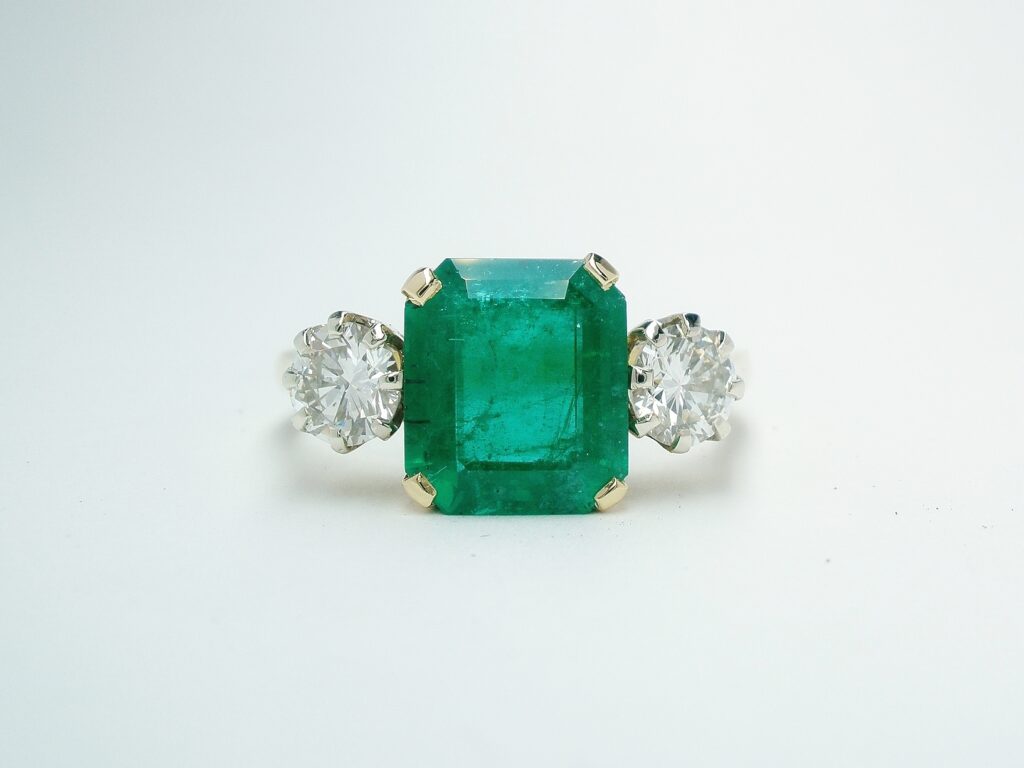 A 3 stone Octagonal emerald & round brilliant cut diamond ring. Replacing the emerald with a similar colour and clarity stone to the original. This stone had to be cut specially to fit the setting. The insurance covered the cost fully.

The client contacted me by phone after losing the large centre octagonal emerald from a ring which I had valued for her a number of years before. She had not yet contacted her insurance company and was looking for some advice as to how to proceed. As I had valued the ring in some detail previously I was hopeful if she wished me to replace the emerald, that by my typing up a detailed and realistically priced quotation the insurance company may accept my quote without asking here to get further estimates. I advised the best way forward, before contacting the insurance company, would be if I source a number of stones that would fit the setting and then choose the stone, from my detailed description and her memory, that was closest in colour and clarity to that of the original and type up a quotation for her to submit to the insurance company.

Having received the ring from the client I sourced 4 stones of differing qualities that either fitted or could be trimmed to fit the setting. One was of poorer quality and two others better, with the forth stone very close to both colour and clarity, all be it, a little too large to fit the setting so would need to be trimmed. In my quotation I explained having sourced stones that were both better and poorer qualities than the stone in the quotation so explaining I was not quoting for the dearest stone.

Once the client had contacted the insurance and submitted my quotation I was contacted within 24 hours by the insurance asking if, in my opinion, the stone had been lost due to the setting being damaged or if the claws were worn and it was wear and tear. I confirmed the claws and setting were in good condition. I concluded the emerald most probably had had a knock, cracked and fallen out. This explanation was accepted as was my quotation which was commented on as being very reasonable! 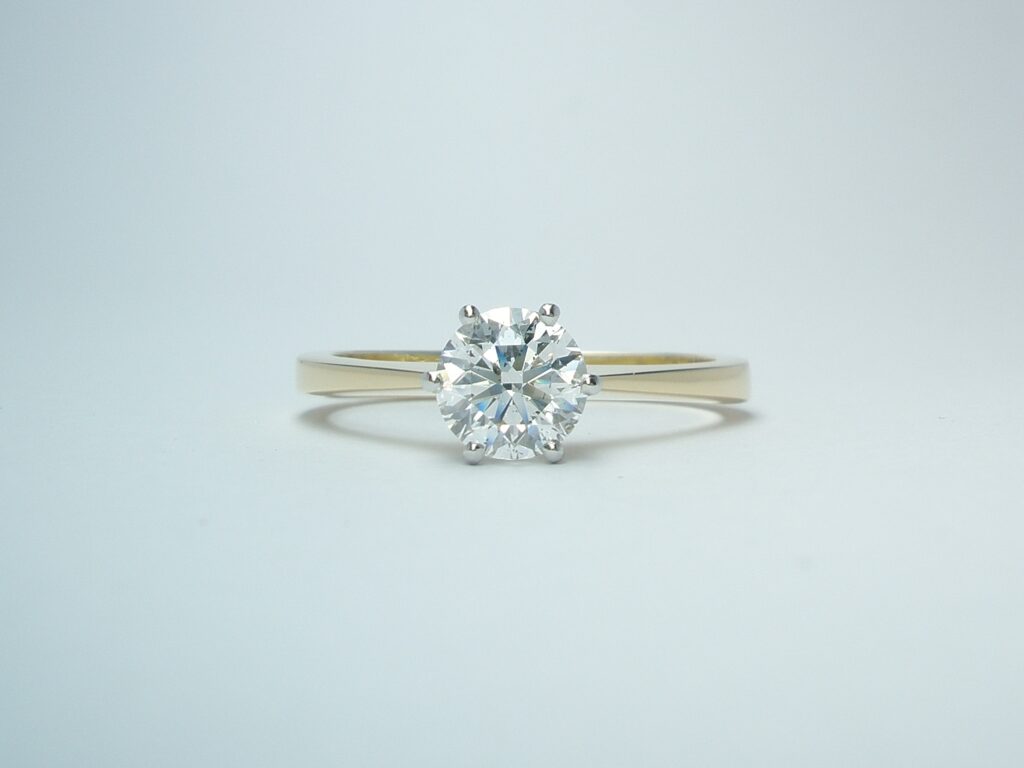 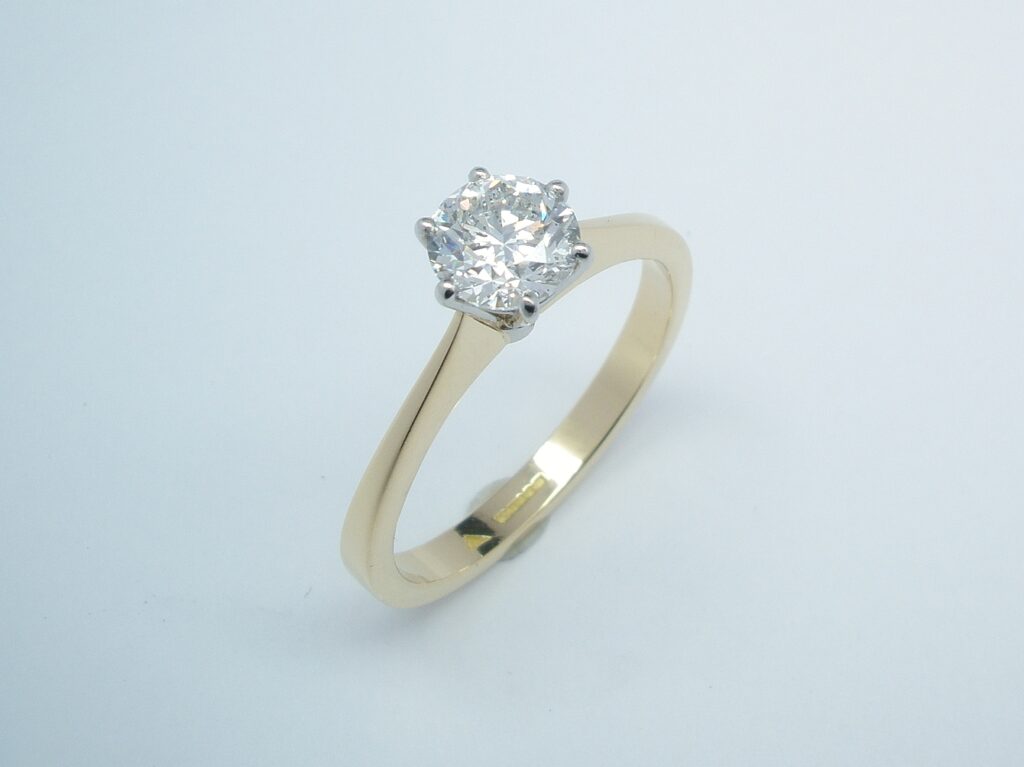 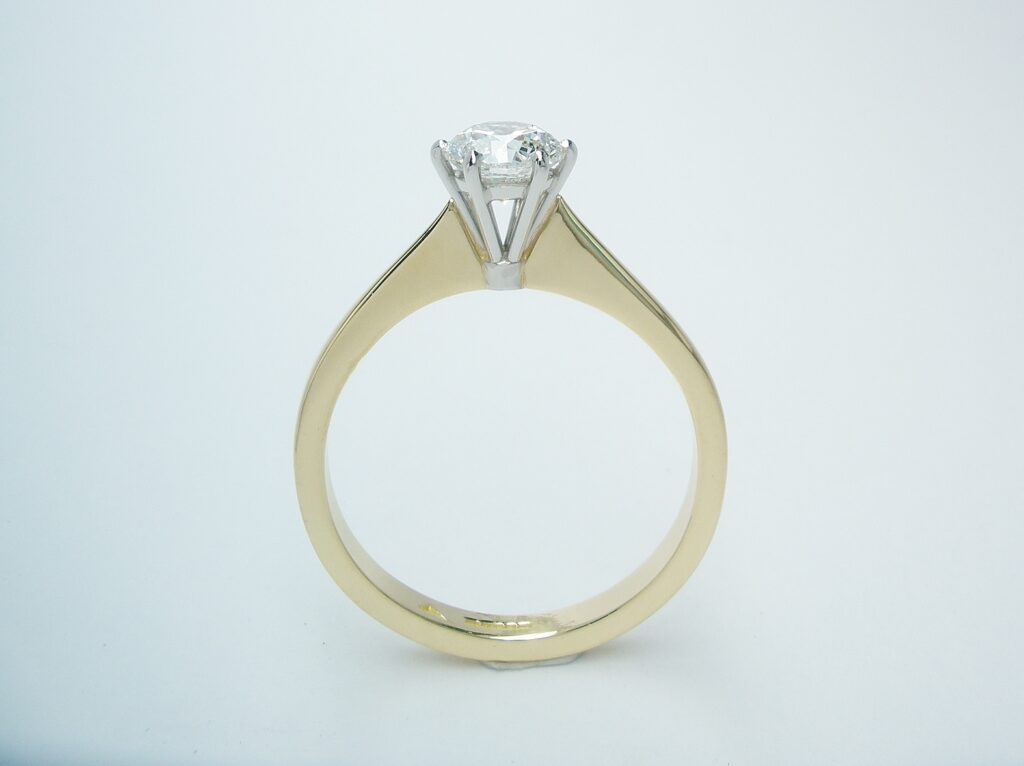 The client had lost the diamond from her single stone diamond ring and required an estimate for her insurance company. Unfortunately she had no valuation or paperwork that confirmed the weight and quality of the original diamond. Estimating the size was not a problem as the setting, all be it worn, was complete so I could determine the diameter. As for the colour and clarity I explained to the client I had to try to be fair to her and the insurance company. I sourced a diamond of the appropriate diameter of ‘F’ colour, SI1 clarity. The client was happy with the diamond and I wrote the estimate explaining that I was estimating for a good mid quality diamond and neither a top quality nor poor quality stone. The insurance company accepted my estimate and as the setting was worn and of an older style the client took the opportunity to have me hand make a modern platinum peg setting. 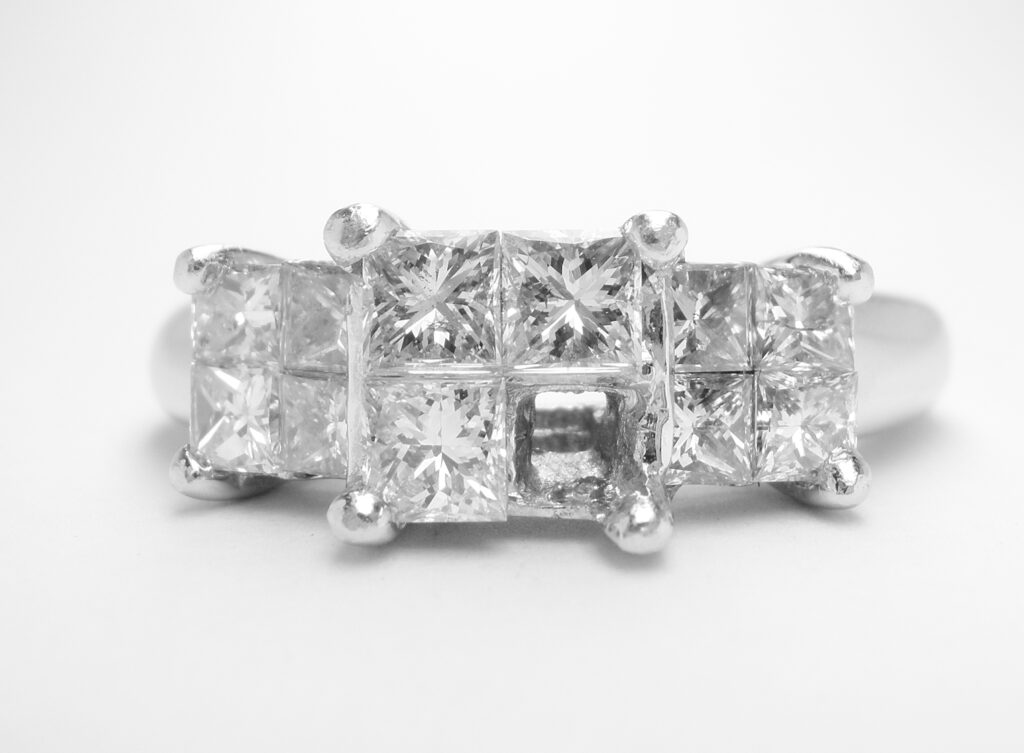 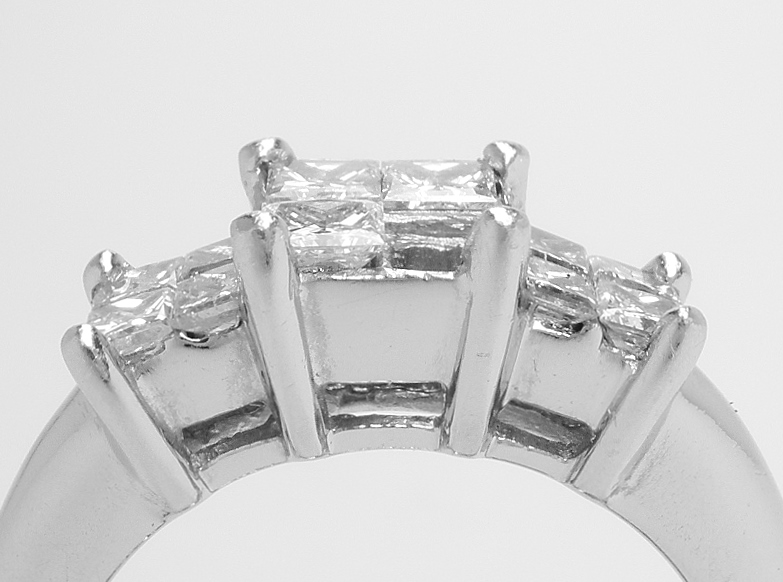 A Transformation With Added Security

A client contacted me after losing a princess cut diamond from her engagement ring. Once I saw the ring I informed her that from experience it was my opinion that the design and manufacture of such invisibly set rings is flawed. This is borne out, in part, as the client then informed me that the jewellers she purchased the ring from no longer stock that style and the jewellery repair company the insurers used also confirmed, once a stone has fallen out a replacement diamond cannot be reset into the original setting. 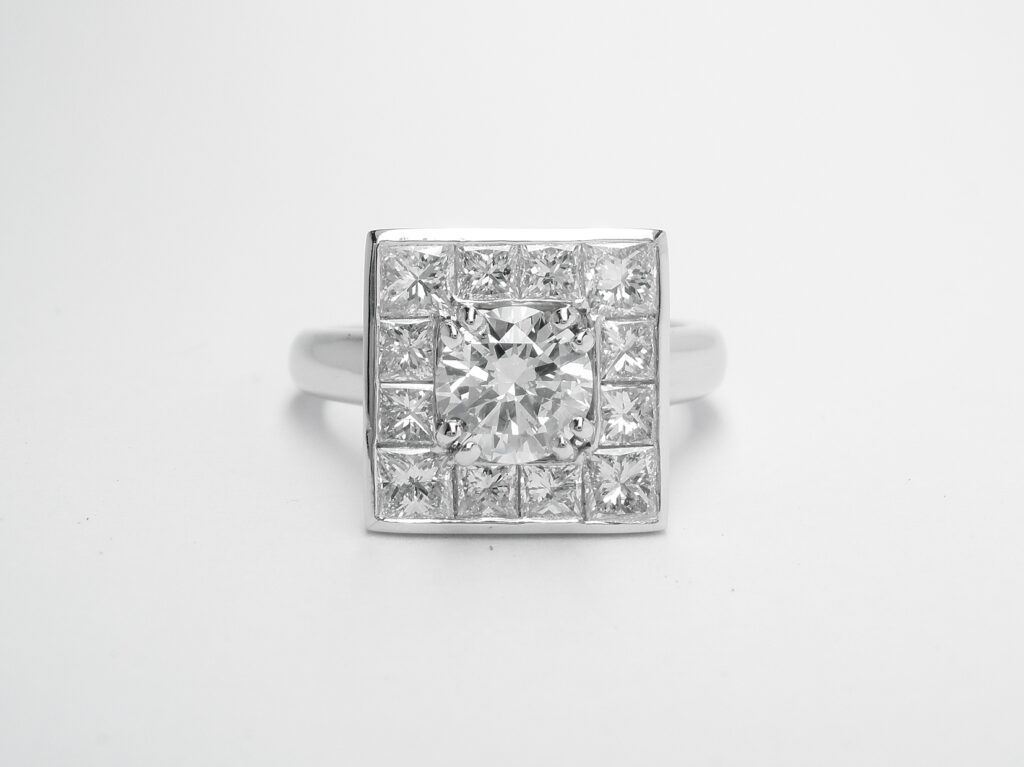 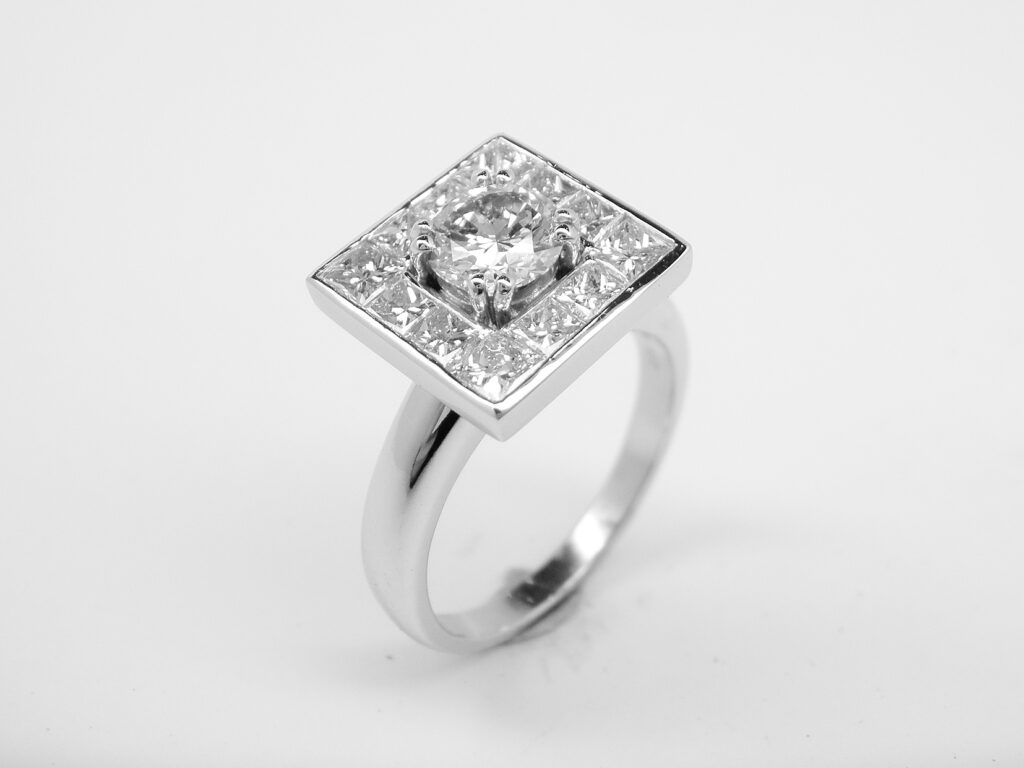 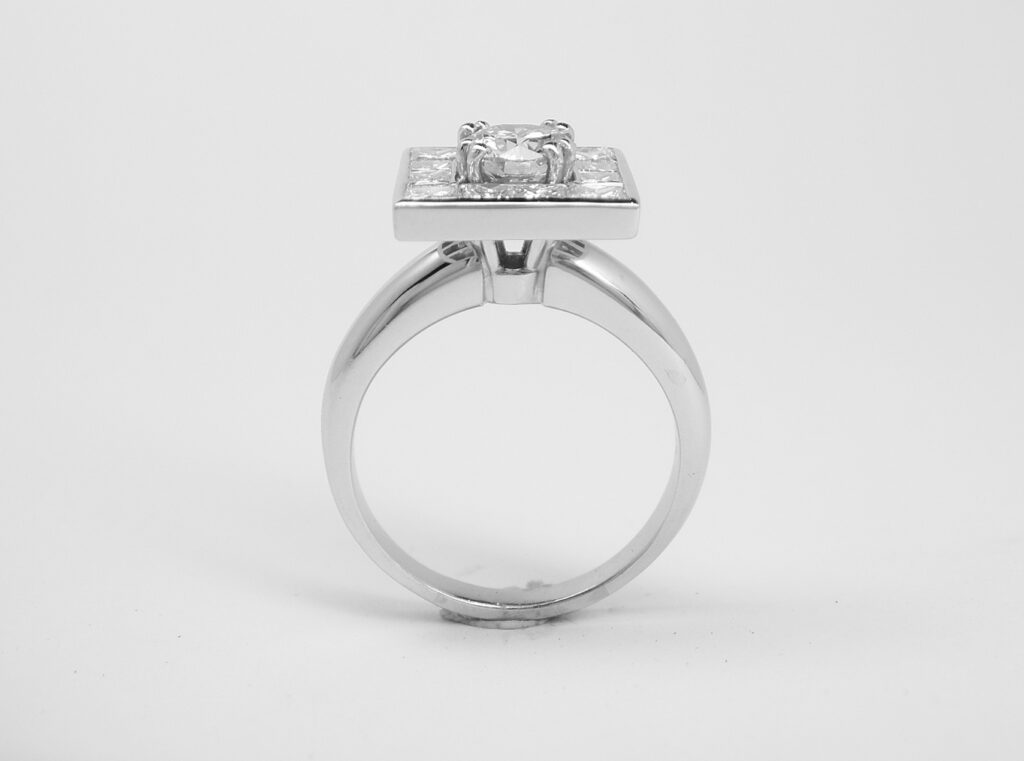 My remit was to quote to supply a diamond to match and to mount the 12 diamonds in platinum, in a similar but far more secure style to that of the original. I submitted my quotation which was accepted by the insurance company.

At this point the client informed me she wished to add to the value of the claim and asked that I come up with a contemporary design using her 11 princess cut diamonds, supplying another to match as per the claim estimate and to supply a larger stone to create a square cluster. I suggested a centre round brilliant cut surrounded by the 12 princess cut diamonds rub-over set in a square. She liked the design I produced and just loves the finished ring. 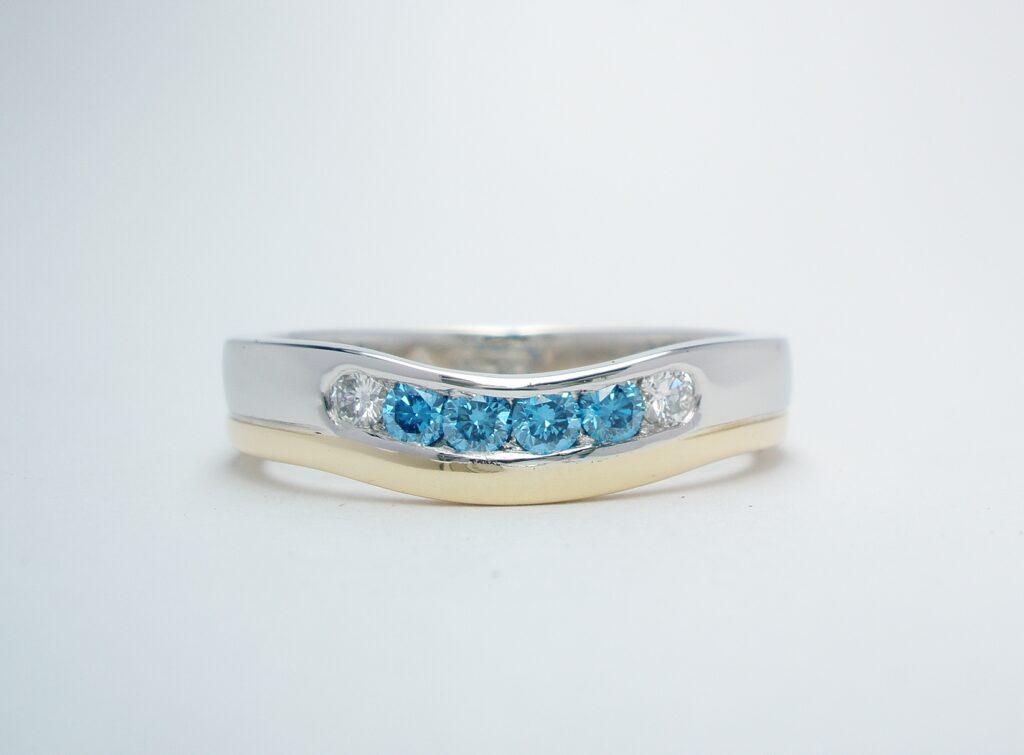 After losing her wedding ring the client contacted her insurance company. The claim was passed to the Lost Management Group ( LMG ) who agreed a value to the claim and supplied the claimant with an LMG Gem card, pre-loaded with the value agreed. The card was posted to the claimant along with a list of
retail jewellers on LMG’s replacement list, anyone of which the claimant can use to replace the item. Below is a review the client has posted on Google.

After losing 2 days of my life looking for a replacement wedding ring on the high street I went back onto the internet and came across Alan’s website and, on liking what I saw, quickly made an appointment. Alan and his wife immediately made us feel at home and were quick to notice that I wasn’t happy with the way my engagement ring sat against a wedding band – something that none of the high street shops had picked up on. It was then that Alan suggested a two tone (to match my watch) band, shaped to fit round my engagement ring and, with the addition of some blue diamonds, (which I didn’t even know you could get) my new wedding ring was born. So, if you want something that is different and stands out in a crowd, go and see Alan, you won’t be disappointed.

If you, or anyone you know has a claim which is passed to LMG then I can deal with the claim.

Or fill out this form