“We visited Alan’s shop in Eaglesham just before Christmas armed with information that we obtained from trawling the internet. Alan presented us with a variety of stones, explaining and demonstrating the problems with the stones we had sourced. If we had not spoken to Alan we would have had no idea of the potential pitfalls and in all likelihood we would have ended up with an engagement ring that was less than perfect.”

Garry and Alison approached me after trawling the internet to source a loose diamond which they were considering in purchasing ‘blind’ for an engagement ring. They had read up about the 4Cs

…and had got confused, as some articles contradicted others.

Having been referred to me, they contacted me to get some accurate information and some advice. I pointed out that with modern technologies man can now manipulate natural diamonds by heat treating to improve their colour and laser to remove small inclusions within the stones. It’s also possible to lab grow white diamonds! As a result, some unscrupulous companies and individuals have recently been caught selling these manipulated/man made diamonds over the internet as naturals along with fake certificates – generally GIA certificates!

I also pointed out that buying diamonds abroad, as some do on holiday, can often be as problematic.

Having explained the pitfalls of either purchasing on line or buying abroad, we then discussed Alison’s requirements with regards the size, colour and clarity she wished, along with the budget available. I sourced a number of loose diamonds of differing colour and clarities to show her and Garry.

This is where the fun started!

Using the diamonds sourced I was able to show Alison, that even with an untrained eye, she could determine the very subtle difference in the grades of diamonds between the D, E. F, and G colours. As for the clarity, even with a 10 magnification lens, she had difficulty in discerning the difference between a VS2 and an SI1 (1 grade difference) even though I was pointing out where the small marks were located.

This proved to Alison that those stating that the clarity is more, or at least, as important as the colour is generally not the case.

I have always maintained that the colour is the more important as this can be determined from a few feet away, whereas the clarity, even with a 10 magnification lens from a few centimetres is difficult to detect.

With my assistance Alison saw for herself the truth about colour, clarity and other subtleties that are relevant to choosing the correct diamond, pleasing to her eye.

Once the diamond was selected we discussed the design which would both suit the size and shape of her finger and hand and also the size of the diamond. I explained to Alison that considering these factors can allow the ring to sit neater on the finger and will show off the diamond to its best effect.

Alison chose the design from a few which had been quickly shortlisted from our portfolio with a little nuance added to make her ring more personal and an original. 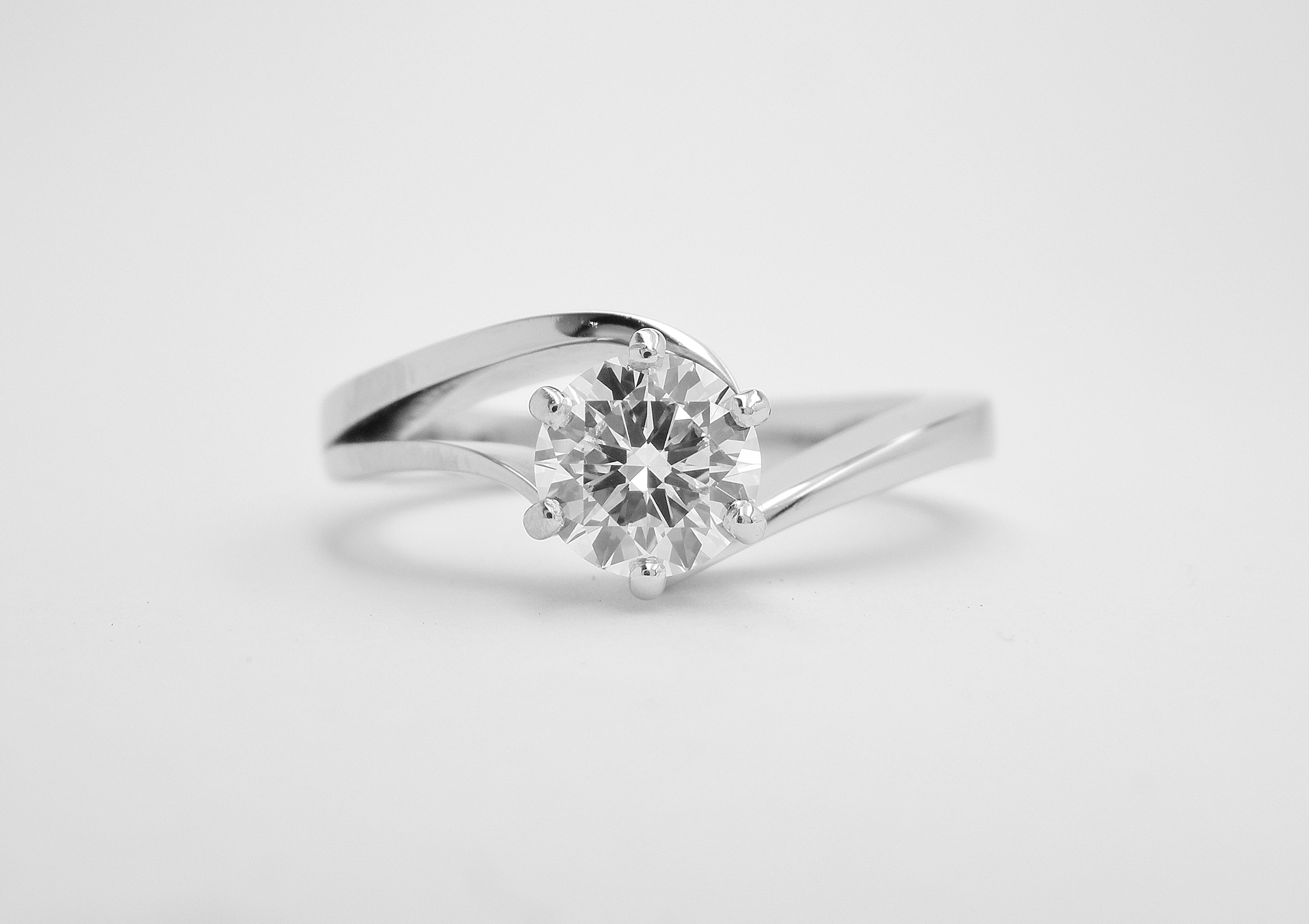 “As a result of meeting with Alan and the time and effort he spent in assisting us, the ring created far exceeded our expectations. Not only did Alan help us identify the stone that was right for us he was also excellent when discussing the best setting. Alison wanted something quite unusual and Alan immediately took on board her comments and made various helpful suggestions. The result was a ring that not only delighted us but one which has been widely complimented as “stunning!”. I would have no hesitation in recommending Alan whether it be for a general piece of jewellery or for that extra special occasion. Thank you for your advice and engagement ring expertise.”

Alison now has a stunning engagement ring that she can wear proudly, with the piece of mind regarding where her diamond was sourced and knowing she helped design it!

If you would like an engagement ring designed and commissioned from scratch, please contact me. I have customers worldwide, from our home in Glasgow… to London, California, Australia, Switzerland, Botswana, Canada, Singapore and Holland to name a few.